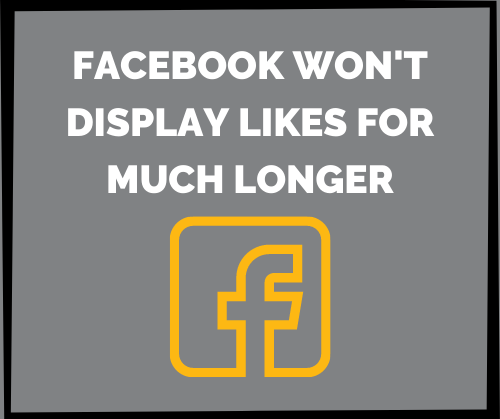 A while ago, Instagram announced that they would be working with the idea of possibly removing the like count on users’ posts. This would be optional to users, and users would be able to customize their profile as to whether their followers could see it on their profile or not. This week Facebook announced that they too would also be partaking in this new update. Announcing this feature sparked controversy amongst Instagram users though it is not surprising that Facebook would also be hopping on this trend.

While this seems to be a trend that many social media platforms will be leaning towards shortly, it is not beneficial to users. Companies, brands, and influencers make most of their profit based on their likes and engagement, and without that being prominently on display, it seems like this might affect their brand.

Overall this new feature does not seem like something that would be beneficial, it seems like something someone with not a lot of followers or engagement might want to use, but even then, it does not seem necessary. In theory, it’s a decent idea, but it doesn’t serve a purpose that will be positive to users. This feature seems like one that will eventually die out and slowly disappear within an update. While it might sound good in theory and slightly appealing to some users overall, this feature does not particularly have many benefits as a whole.

This Article Was Written By Courtney Kwiatkowski

Courtney combines her passion for Social Media and expertise with over 10 years of project management. As the Director of Social Media for MILE Social, Courtney oversees the social media platforms for every client. From strategizing, to content creation, to analytics, Courtney ensures MILE Social's clients turn their audience into paying clients.

Get A Free Quote

For the most part, yes, everything you put out on social media is public information. The only time someone does not see what you write is in a Direct Message, or Private Message. Only the person involved in the the Private Message can see what you are saying. This feature is good for contacting a customer directly so your conversation remains private.

Geotargeting is when certain people within an area are targeted. Geotargeting is important for brick and motar companies to use because they usually serve a particular radius from their physical location. Smaller businesses that serve a specific audience can also benefit from geotargeting, and can generate more foot-traffic to their location.

Each platform has it’s own way to target an audience. Twitter uses Hashtags and URL’s. Instagram uses Hashtags. Facebook has hundreds of options to choose from such as behaviors to choose from, location, and interests. Your account manger will go over who your target market is and any keywords that should be used and use them accordingly.